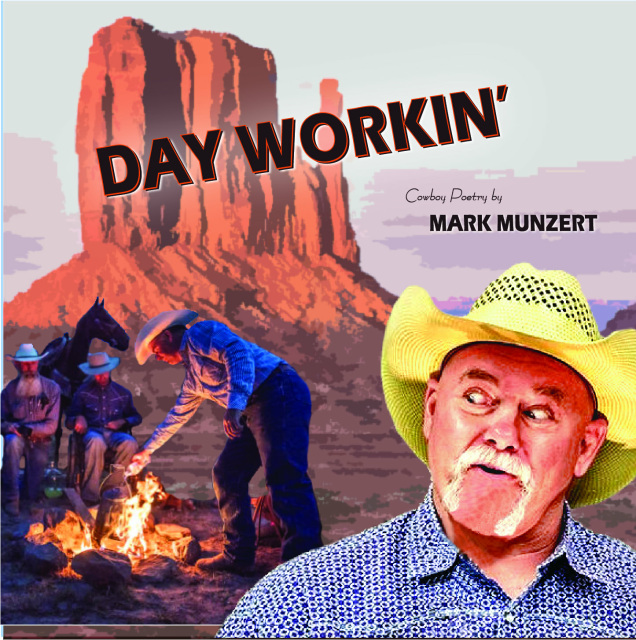 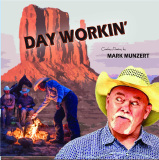 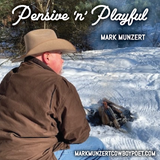 DAY WORKIN' is a collection of Mark's original poetry and snippets of cowboy culture. It draws inspiration from toil with horses and cattle, it pays honor to cow-folk's values, and stands as a reminder to embrace the ethics, grit, sorrows and elation of cowboy life.

Some whimsical, some poignant, others pensive. Seventeen tracks of original poetic parlance and rhymsical recitin' of cowboy culture then and now.

“In his release “Day Workin’” New York cowboy poet Mark Munzert takes you through various possible events that might occur during the cowboy’s day, so the trappings are basically in the familiar territory of Cowboy Arts & Sciences. But the works are written convincingly and, due to Munzert’s vocal flexibility, the delivery’s better than sometimes is the case. Able musical support comes from our old buddy Ernie Sites along with Patrick Stanfield Jones and Max Munzert. Picks include “Cowpokes In A Heap,” “Wind Pumps On The Mesa,” “Round Pen Blues” (a lot said with an economy of words...very cowboy, that!), “I Should, I Could, If Only,” the autobiographically true “Good Hand,” “Bonded” (with its’ O.Henry style ending), “Roadmap’s Merry’d Christmas,” “Influence” (with its tone of acceptance) and “First Ride” (another autobiographical poem embellished only in the truest Cowboy sense to fortify the yarn)!

"Mark recently released a CD of his poetry, Day Workin’. It consists of seventeen of his poems in which he writes about his experiences. Mark is a heck-of-a performer and his poetry is fun to listen to. Don’t take my word, go out and buy the CD and see for yourself. His recitation of poems are accompanied by background sounds, mostly music, which fit the meanings of the poems. For example: joyful, when he writes about a way of life he loves; light and airy, when humor is there; and fast, when action is there. My favorite poem about fixing windmills is accompanied by the sounds they make when the wind is blowing. I have read a poem about hay and listened to a song about fencing, for some reason, I enjoy songs or poems about parts of ranching which are not action filled or romantic. Here are some of my favorites, probably would change from day to day depending on my mood:

Windpumps on the Mesa - my favorite

Doggone Dog - this poem is about a farrier and his dog, clever ending.

Good Hand - poem about what’s important to a cowboy

Roadmaps’ Merry’d Christmas - interesting characters out there that we all have met.

Hope this review explains why I like this CD so much.

Get the CD, sit in a comfortable chair with a cup of coffee, you’re in for an enjoyable ride!"

PENSIVE 'N' PLAYFUL is a look under the brim of the life circumstance and guffaws of contemporary cowboy. Real life happenings, dilemmas, and triumphs written from experience.

PENSIVE 'N' PLAYFUL Review by Rick Huff, International Western Music Association: "A straight-forward Cowboy Poetry collection awaits you in Mark Munzert's new one. He gives you the titles, then gives you the poems...no muss, no fuss! Munzert's quicker portraits get in and out with purpose, and when he chooses to tell a story he tells a good one, original and worthy.

Rhythmically...and by this I mean listening straight through from one work to the next...I will say for my ear the tracks are tightly packed. But "what I've heard" here is sturdy stuff. Picks include "Don't Worry, We'll Get Through for its scope, "High 'n' Low" for its spare yet strong images, "Peril" for...nope, y'better experience it for yourself, "Cougar" for the opposite reason than "Peril," "Kneaded Relief", and a fine horse moment, "Mustang Sally" a more than broken horse spirit, "An Old Cowboy Would" for sheer originality and "Great Unexpectations" for his picture of the kind of day poetry can best portray.

As a performer, Mark Munzert may not be the "actor" some are, but he's more Poet than many. Twenty-four tracks, recommended.

Contact Mark at: markmunzert@gmail.com to order yours, $15 each individually or $25 for both CD's.